432 Posts of Sub Inspector BPS-14 announced by PPSC in July 2019 in Punjab Police. While looking at the PPSC past papers of Sub Inspector test will be of mcqs type and will carry 100 marks and of 90 minutes duration and there is also negative marking in the paper . Candidates who are appearing in PPSC test for the first time are asking for how the Sub Inspector SI PPSC paper 2019 will be. Following is the syllabus of PPSC SI in Punjab Police, Government of Punjab.

Check below the syllabus of SI in Punjab Police announced by PPSC, paper will comprise of the following sections.

IT and Language Comprehension

Use of Basic Softwares like MS Office, Electronic Record Keeping, Internet Email etc and Comprehension in English and Urdu. 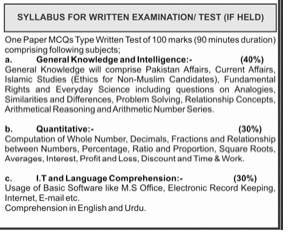