596 Posts of Constable BPS-05 in Federal Investigation Agency are announced by FIA in May 2021. This article will help you in preparation of Constable test. As the syllabus is same for all posts but difficulty level will depend on the grade. Test for this post will have basic and easy questions.  The syllabus for the post of Constable FIA already announced. Test will be of MCQs type and computer based test and will carry 100 marks. Candidates who are appearing in FIA test for the first time are asking for how the Constable paper 2021 will be. While looking at the past papers of Constable test will be MCQs type . Following is the syllabus.

English Portion of constable  will contain 20 MCQs  will consists of following sections . MCQs in  English Section test will contain completion of sentences, Vocabulary, synonyms, antonyms , Comprehension on the base of given para, sentence correction, precis writing, report writing , idioms  and pair of words and this paper will contain 20 MCQs from English section and will carry 20 marks .

Islamic Studies for the post of Constable in FIA will contain following  10 Multiple Choice Questions on the following course outline syllabus.

Pakistan Studies  for the post of ASI Constable includes   10 MCQs from the following sections .

IQ will also be the part of this paper and will have following syllabus especially from Basic Arithmetics of 20 MCQs:- 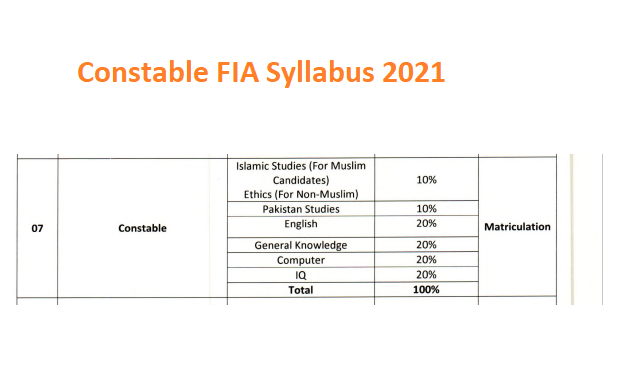