The government of Balochistan has extended the upper age limit to 43 years in favor of fresh candidates and already serving Government Servants. All the applicants who are willing to apply for Government and autonomous bodies jobs announced by BPSC and government departments will get relaxation in age for 43 years.

According to the notification Balochistan age relaxation issued by Services and General Administration, Government of Balochistan " In continuation of the Department's Notification  No. S.O(R-1)3-12/S&GAD-2018/5232-5331 dated 27th November 2019 and in the exercise of the powers conferred by sub-rule (5) with sub-rule 6 of rule 4 and in relaxation sub-rule (3 ) of rule 4 of Balochistan Governmenlt initial appointment to Civil Service posts  (Age and Relaxation of upper age limit) Rules 2012, the government of Balochistan is pleased to grant general relaxation in upper age limit up to 43 years in favor of fresh candidates of Province as well as serving government servants with effect from 24th June 2020 till 23rd June 2021. 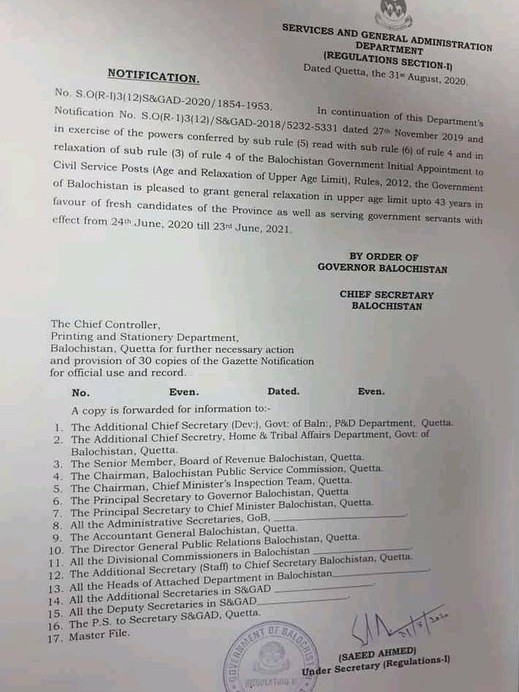