Two Government officials arrested over CSS 2019 papers leakage before time. CSS Papers were being sold to the candidates two hours before the exam. CSS 2019 exam is going across Pakistan at Islamabad, Lahore, Karachi, Peshawer, Quetta and 14 other centers. CSS 2019 exam was started on 14th February 2019 and three papers has been completed so far and in between this bad news came.

Complaints received by FIA regarding selling of CSS papers to the candidates who are appearing in CSS Exam.  One Government servant Syed Tajamul Hussain Naqvi working in Excise and Taxation Department Punjab and Engineer Shehzad Sial arrested over leakage of papers. As per media reports Khalid Hussain Mughairi incharge and Assistant Director of Federal Public Service Commission Balochistan regional office played a major role in this leakage of papers, his bank account in Multan was credited with 9 lac and eighty thousand rupees.  Khalid Hussain Mughairi has been arrested by the FIA in Quetta and he will be shifted to Lahore soon for appearance in the court. Details regarding FIA inquiry still awaited. 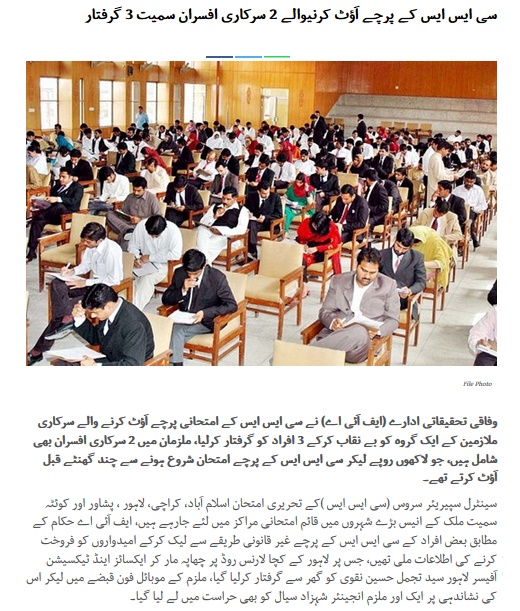