Federal Public Service Commission has announced a screening MPT test will be conducted before final written exam of CSS starting from 2022. CSS Aspirants who are willing to apply for CSS 2022  are asking for the test date of Screening Test 2022. It is expected test will be conducted from 20th February 2022 as per tentative schedule published . FPSC has also announced Syllabus for Screening Test (MPT Multiple Choice Preliminary Test). Many of the aspirants and candidates were asking when the test will be held.

Test Date for Screening Test in Federal Government Department will start from 20th February 2022 Tentatively, Third Week of  February 2022 or Later as per tentative Schedule Mentioned in Advertisement.

Test Date for the  it is mentioned that tests for above mentioned advertisement will be held from 3rd week of February 2022 as per tentative schedule and it will have one paper test  . CSS exam is conducted each year for appointment in Federal Government in various department. This year Federal Government on the recommendation of FPSC has changed the policy to conduct Multiple Choice Questions Based Preliminary Test before conducting written test for CSS.  We have more than 3 months for the preparation of the said test . FPSC has also announced the syllabus for the Screening test. This test will be objective type test MCQs type having one paper of 200 Marks with following subject distribution :- 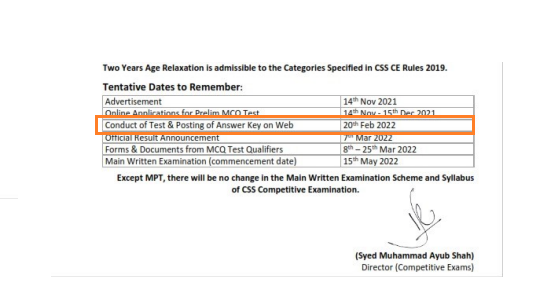