FPSC has announced the Final result of CSS 2017 after conducting Psychological tests and interviews. What was the difference of CSS 2017 result with previous years result of 2016, this time first three positions in CSS are taken by boys.  Muhammad Awaid Irshad Bhatti  is the CSS topper of 2017 and he has strong educational background . He has schooling from Aitchison College Lahore , from here he completed his O level and A level . For graduation he joined University of California and did BS(Hon's) in (Economics and Business) and Finally he completed his MPhil in Development Economics from Cambridge University. In a video message submitted by World Times Institute he has given credit of success to that Institute and their faculty members. Watch the Complete video of Muhammad Awaid Irshad below what he said in motivational speech. 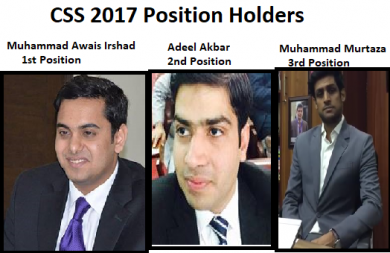 DMC of Muhammad Awaid Irshad Bhatti is available now . He secured 42 Marks in English Essay , 59 Marks in English Precise and Composition, 59 Marks in General Science and Ability, 76 Marks in Current Affairs and 59 Marks in Current Affairs and 61 Marks in Islamiat DMC of Muhamamd Awaid Irshad CSS topper will be available soon here . As details Marks Certificate still not issued by FPSC . We will share his DMC on this page as it will be available . His subject selection and optional subjects he opted  will also be shared here . 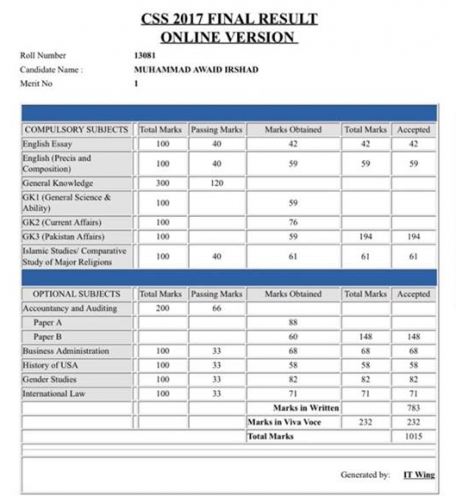 Muahammad Irshad in a video message said that he was not aware of any thing about CSS Examination when he joined WTI in March 2017. His Achievement of taking first position in CSS is the result of the hard work of his teachers. He further said that WTI teachers told tricks about CSS Exam and guided about the optional subject selection. FAculty members also told which literature is beneficial and which is not and provided notes and told tricks how to write an essay and precis which is the basic requirement of clearing CSS Exam. They have conducted daily , weekly and monthly tests which make him perfect in all optional and compulsory subjects and before final exam in February mock tests were conducted to review our preparation.

Muhamamd Awaid Irshad optional subject still not shared and DMC still not provided by the FPSC . It will be availble here as soon as FPSC will provide it.